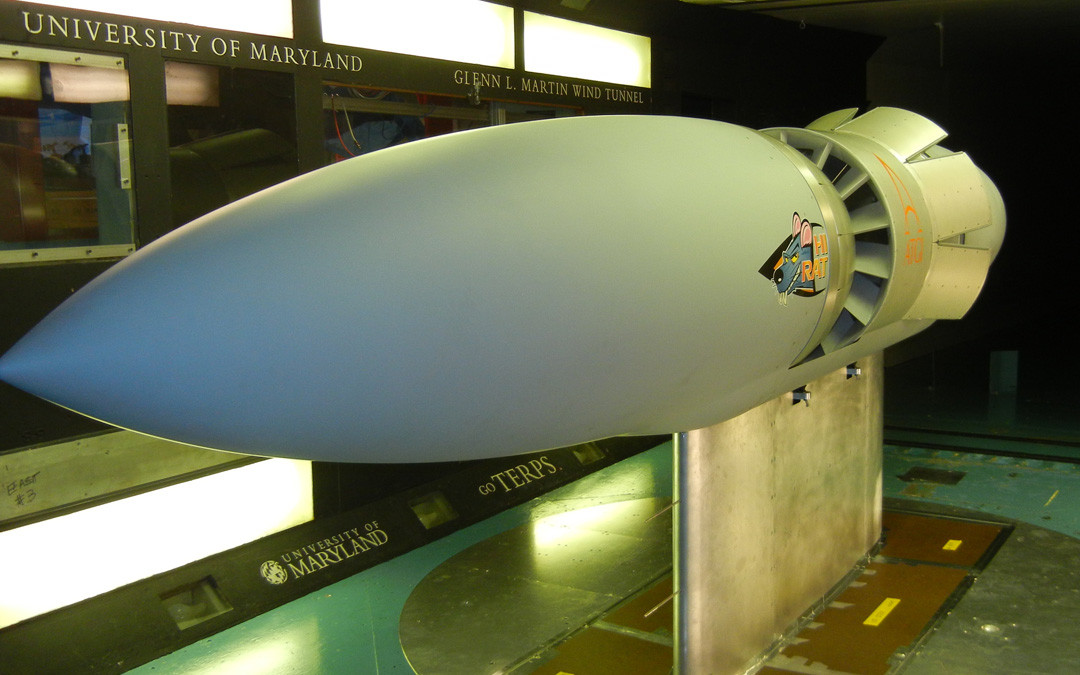 Think “ram-air turbine,” and the pop-out propeller providing emergency power on an airliner comes to mind, or the air-driven prop powering the ALQ-99 jamming pod on a Boeing EA-18G Growler. But what if huge amounts of power are needed, for electronic attack, long-range sensors or directed-energy weapons—and not just in emergencies, but across the flight envelope?

Wind-tunnel tests on a high-power, air-driven generator designed for the U.S. Navy’s Next Generation Jammer (NGJ) pod have been completed and its developer is looking at other applications, including power generation on unmanned aircraft. The high-power ram-air turbine (Hi-RAT) developed by Advanced Technologies Group Inc. (ATGI) is a ducted turbine embedded within the pod, with inlet and exhaust doors for high power when open and low drag when closed.

Hi-RAT was flight-tested by one of the NGJ bidders, but the Raytheon jammer selected by the Navy uses a different powergeneration system. The July award of a $279.4 million contract for the NGJ technology-development phase is being protested by one of the losing bidders, BAE Systems, opening up the possibility that the competition may have to be restaged. ATGI, meanwhile, demonstrated the performance of its NGJ power-generation system to the Navy and prime contractors on other electronic-warfare and unmanned-aircraft programs during tests of the Hi-RAT installed in a pod in the Calspan wind tunnel in Buffalo, N.Y., in late August. Hi-RAT produces 2-3 times the power of competing systems, says ATGI President John Justak. For NGJ, “we demonstrated full power over the full flight envelope: threshold and objective,” he says. “We are compact and modular, with fail-safe operation.”

ATGI has demonstrated that Hi-RAT can produce 90 kW of power at the original low-airspeed, high-altitude design point for NGJ, where the dynamic pressure of air flowing into the ram-air turbine is low. “We have a unique approach to turbine design,” Justak says. The turbine has vanes wrapped helically around a conical shaft, changing in shape along their length from a pressure-driven reaction turbine blade to a velocity-driven impulse turbine blade. “Ours is more kinetically driven, like a windmill. At low velocity and low density, we use potential and kinetic energy to drive the turbine—even at 50,000 ft.,” he notes.

The system has been developed with support from the Navy’s small-business innovative research and Office of Navy Research rapid innovation fund. “We were asked by the Navy to not go exclusive with any prime, to be available to all primes including the NGJ winner,” Justak says. In July 2012, Northrop Grumman flight-tested a prototype NGJ pod using ATGI’s ram-air turbine for prime power generation, but the companies did not formally team, he says. Northrop, teamed with ITT Excelis, was the other losing bidder, along with BAE. Hi-RAT is a one-piece assembly that includes articulated inlet and exhaust and a single-stage turbine. When operating, exhaust flaps open to create suction to pull air though the turbine. If an anomaly is detected, the inlet and exhaust close

Embedded inside the pod, the air-driven turbine has helical vane-like blades (See graphic – download PDF) automatically to reduce drag. The NGJ Hi-RAT is 24 in. in diameter, 60 in. long and potentially could generate up to 700 kW, Justak says. But ATGI has tested a 300-watt “micro-RAT” and other versions including a 6-kW system to power intelligence, surveillance and reconnaissance pods carried by aircraft such as the Lockheed Martin C-130. ATGI is looking at other applications, including providing power on unmanned aircraft at high altitude. “We are also discussing with commercial aircraft manufacturers the idea of a buried ram-air turbine” to provide emergency power with less drag, Justak says.